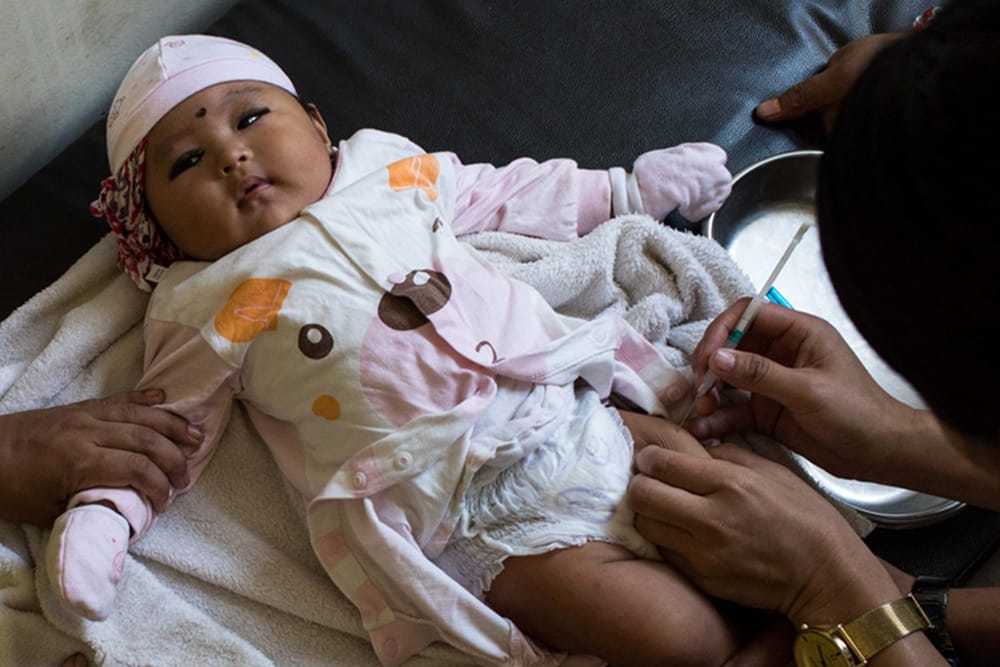 In Nepal, there were concerns that the public might not readily accept an immunization visit requiring three injections simultaneously, since 14 week-old infants would receive the PCV vaccine along with injectable polio and pentavalent vaccines during the same visit. Therefore, Nepal introduced PCV10 using an accelerated 2+1 schedule with infants receiving the first two doses at 6 and 10 weeks, and a final booster dose at 9 months.

Because there were no available data describing the immunogenicity (i.e., the ability of the vaccine to provoke an immune response) for spacing the two first (primary) doses by four weeks instead of eight weeks, our team conducted a randomized trial to compare the novel schedule to the previously recommended 2+1 schedule, measuring immunogenicity after the primary doses and before and after the booster dose given at 9 months in both arms of the study.

The proportion of children with antibody concentrations correlated with protection, which is 0.35 mcg/mL, was similar for both schedules. The accelerated schedule was inferior to the recommended schedule for some serotypes as measured by antibody concentration, but the differences observed are not likely to be clinically relevant, as after the booster dose, given at nine months of age, these differences are substantially diminished.

Results from this randomized controlled trial demonstrate that children vaccinated under an accelerated PCV10 dosing schedule produced sufficient levels of protective antibodies against the pneumococcal bacteria contained in the vaccine.

Fig. 1 Following the second dose, an accelerated PCV schedule sufficiently protected most children against the majority of pneumococcal serotypes included in the vaccine

Children were sampled at 14 weeks

Fig. 2 When comparing the two schedules following the third dose of PCV10, there were no significant differences in protection offered to children for any serotypes included in the vaccine

Children were sampled at 10 months

These results were included in a recent review by the PCV Working Group of the principal advisory group to WHO for vaccines and immunization, the Strategic Advisory Group of Experts on Immunization (SAGE).

Based in part on these data, the group recently revised the WHO recommendations to allow for the two primary doses of PCV to be given as little as four weeks apart when logistics require a different schedule. However, the conventional schedule is still the preferred schedule.